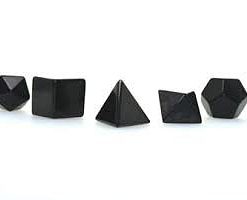 Platonic Solids are shapes that form part of Sacred Geometry. They were first catalogued by the ancient philosopher, Plato (hence their name), although evidence of these most magical of shapes has been found around the world for in excess of 1,000 years prior to Plato’s documentation.

They are made up of the ‘Five Convex Regular Polyhedra’: Hexahedron (cube), the Octahedron (double inverted pyramid), a Tetrahedron (pyramid), Icosahedron and Dodecahedron. The names are derived from the number of sides each shape has: 4, 6, 8, 12, and 20 respectively.

The shapes that form the five original Platonic Solids occur naturally in nature, and indeed in the crystal world. Working with them individually is said to help with our connection to nature and the higher realms of the cosmos; to find the common pattern which links us all at a molecular as well as at a spiritual level.

Shungite clears the energies of the entire body and opens one to receive Spiritual Light. Shungite also operates on the molecular level, freeing us from the bondage of negative patterns and energies. Shungite is a stone of Truth, it tends to dispel one’s self-harming or self-defeating habitual patterns. Shungite is wonderful for cleansing and purification also. Shungite also offers an aura of psychic protection, primarily because of the energetic alignment it facilitates.

Made from Type 2 Shungite

Shungite is a stone of Harmony and Balance……..Read More About Metaphysical Crystal Meanings