FREE DOMESTIC SHIPPING ON ALL ORDERS OVER $100! Dismiss 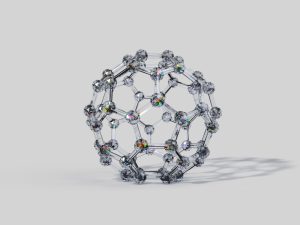 Shungite is not actually a crystal. Shungite is a black, lustrous, non-crystalline mineraloid consisting of more than 98 weight per cent of carbon.

Shungite is elementary non-crystalline carbon with a metastable structure incapable of graphitization. It is also used as a term to describe a sequence of Precambrian metamorphic rocks from the Karelia region of Russia containing such carbon. Trace amounts of fullerenes (0.0001 < 0.001%) have been reported from such rock (Mosin & Ignatov, 2013). Shungite has a biogenic origin. Originally described from Shun’ga area, Shun’ga village, Onega lake, Karelia Republic, Northern Region, Russia. (mindat.org)

History/Mythology: The only known source of Shungite is from the Shunga area in the Karelia region of northern Russia.  This stone has been known and used by the people of this region for a long time, and the first recorded use was by Czar Peter who travelled to the region to use the water. The exact origin of the stone is unknown as it is 2 billion years old, it has been theorized that it came to the area on a meteorite or was the stone that was formed as an ancient sea evaporated and ended as land…… no one knows how it formed, they just know how useful it is in healing.

Shungite receives its healing power from one of its elements, fullerenes – a globular hollow molecule consisting of several dozens of carbon atoms. When fullerenes, a special molecular formation, were discovered in Shungite a few decades ago, it became a sensation and the researcher received a Noble Prize for his work. Fullerenes, getting in our body, behave as the most powerful and most long-acting antioxidant as a means to fight free radicals. Today, doctors have great hopes for fullerenes.

Shungite is a powerful stone to shield you from the electromagnetic radiation given off by electrical equipment… including computers, mobile phones, microwaves and televisions. It grounds spiritual energy to bring it into the Earth plane existence. Shungite is also used to bring Light into the auric energy field, allowing positive energy only to reach within that field. This brings not only physical protection but also psychic protection. It is said to be protection against the evil eye and negative energies.

There are four main types of Shungite. 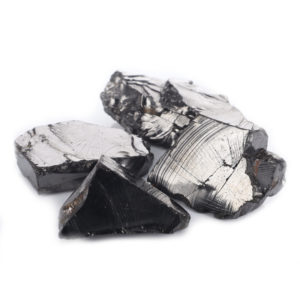 1. Elite is the scarcest form of Shungite and accounts for around 1% of all Shungite mined. It contains a higher quantity of Fullerenes per mass than type 2 Shungite. It is 98-99% carbon compared with around 70% carbon for type 2 Shungite.
Elite is the most beautiful type of Shungite. It does not lend itself to being polished or shaped so is always kept in the raw form in which it is found. Each piece is unique and will be characterized by a shiny semi-metallic look often highlighted with conchoidal patterns.
Another common feature of Elite is Ochre coloured inclusions. These are Jarosite, a basic sulphate of iron formed from the oxidation of Pyrite. Elite is sometimes called crystallized Shungite because of its naturally faceted but this term is incorrect since Shungite is an amorphous mineral and never crystallises into any geometrical shapes.

2. Type 2 Shungite is easily shaped and polished so all, spheres, cubes,

pyramids etc that you see will be this type. The colour will be dark grey for unpolished, with visible lines of Pyrite often seen, to black for polished items and generally has lines of pyrite less visible throughout. Either polished or unpolished Shungite works in the same way. The only difference is how they look. Type 2 Shungite is approximately 60-70% Carbon. This is the most common form of Shungite.

3. Type 3 Shungite is the base grade of Shungite and has approximately 25% Carbon content. Even though it has the lowest carbon content it is by far the best one to use for water purification. Most studies carried out on creating Shungite water use Shungite shards/crumbs. It is also the preferred choice of Regina Martino in her book ” Shungite – Protection, Healing and Detoxification. Regina calls this Shungite ” black Shungite ” and specifically mentions it as the one to use. Some Russian cities have added Shungite shards to their water supply systems as it does such an amazing job purifying water!

Fullerenes are a recently discovered allotrope of Carbon (others being Diamond & Graphite). They form hollow molecules with the most common being made up of sixty carbon atoms (C60).

Fullerenes were discovered in 1985 by Robert Curl and Richard Smalley. Together with Harold Kroto, they synthesized these three-dimensional forms of carbon while trying to simulate the high-temperature, high-pressure conditions necessary for the formation of stars. Their discovery won them the Nobel Prize in chemistry in 1996.
The natural occurrence of fullerenes remained unclear until they were verified in deposits of Karelian Shungite in 1992[1].

In 1985 Harold Kroto of the University of Sussex, working with James R. Heath, Sean O’Brien, Robert Curl, and Richard Smalley from Rice University, discovered fullerenes in the sooty residue created by vaporizing carbon in a helium atmosphere. In the mass spectrum of the product, discrete peaks

appeared corresponding to molecules with the exact mass of sixty or seventy or more carbon atoms, namely C60 and C70. The team identified their structure as the now-familiar “buckyballs”.[13]

The name “buckminsterfullerene” was eventually chosen for C60 by the discoverers as a homage to American architect Buckminster Fuller for the vague similarity of the structure to the geodesic domes which he popularized; which, if they were extended to a full sphere, would also have the icosahedral symmetry group.[14] The “ene” ending was chosen to indicate that the carbons are unsaturated, being connected to only three other atoms instead of the normal four. The shortened name “fullerene” eventually came to be applied to the whole family.

Kroto, Curl, and Smalley were awarded the 1996 Nobel Prize in Chemistry[15] for their roles in the discovery of this class of molecules.