FREE DOMESTIC SHIPPING ON ALL ORDERS OVER $150! Dismiss

A Mala simply means ‘heavenly garland’ and can be used for reflection, yoga practice, meditation or as part of your unique style. Simply stated, they can be worn by anyone who wants a more mindful, beautiful and peaceful life.

Malas, in Buddhist cultures and communities, are frequently given as gifts, for example, to celebrate a birthday, marriage, or holiday. They are also given as keepsakes and a source of protection to loved ones, of any denomination, and also work with healing and birthstones. If you have a spiritual teacher, it is traditional for you to request that he or she “bless” your Mala, to ensure that your meditation practice is free from obstacles.
Malas can be worn by anyone of any religion. If wearing a mala resonates with you and makes you feel good then you should wear it! 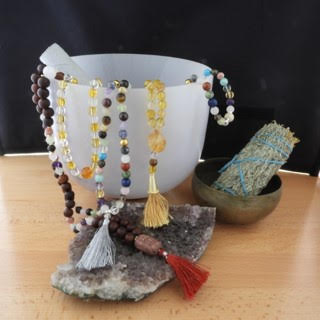 WHAT IS A MALA COMPRISED OF?

108 BEADS AND THEIR SIGNIFICANCE

So what makes the number 108 so special?
Here are some of the interesting ideas that can be found….

There are said to be 108 earthly desires in humans

There are 108 lies that humans tell

There are 54 letters in the Sanskrit alphabet. Each has a masculine and feminine side, shiva and shakti. 54 times 2 is 108

There are said to be 108 paths to God

Hinduism
108 in Hinduism refers to the number of deities. Some say that each of the deities has 108 names

Sikh
The Sikh faith has a Mala of 108 knots tied in a string of wool, rather than beads

Buddhism
Buddhists sometimes carve 108 small Buddhas on a walnut to bring good luck or ring a bell 108 times to celebrate a new year. There are said to be 108 virtues to nurture and 108 sins to avoid

Chinese
The Chinese Buddhists and Taoists use a 108 bead mala – called su-chu. It has three spacer beads dividing the mala beads into three parts of 36 each. Chinese astrology says that there are 108 sacred stars

There are many more beliefs around the number 108, these are but a few!

Counter beads placed in Malas are a popular choice for those who are learning to meditate. They are there to help us and can sometimes almost whisper to us ” Come back” when the mind starts to wander. 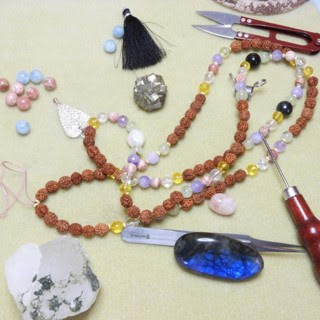 The thread itself represents the bond that we have to the Universe. It holds the beads together and is sometimes referred to as “The Thread of the Universe”. The thread symbolises that everything is interconnected, nothing is separate.

One reason why the knots are placed in between each bead is that they symbolise our connection to the divine Universe and helps us to keep our distractions separate from ourselves in the same way that the beads do not touch each other.

The Guru bead is the 109th bead. This bead symbolises the Divine or God. When practising meditation you must never cross over the Guru bead – as it would show extreme disrespect and is looked upon as stepping over the Divine. Instead, you should turn the mala around 180 degrees and go back the way you came, in the reverse direction. Since the Guru bead is not counted during meditation and is separate from the rest of the Mala it illustrates that God or The Divine is beyond ourselves and our Universe.

The tassel represents our connection to the Divine as it is the link between our meditation beads and Guru bead and holds all of the threads and beads together.

Once you have your own set of Mala Beads you generally need to cleanse and bless them. Here are a few ways you can choose to do this or simply do what feels right for you!

HOW TO BLESS YOUR MALA

You can “bless” or activate your own mala by creating a sacred space, for instance- lighting a candle and then holding your Mala over sage, incense or juniper smoke. While you are doing this, say a quiet prayer. You can also use a Crystal or Metal Singing Bowl to cleanse your Mala’s, this brings sound and crystals together.
Malas can be left in the sunlight or the moonlight to re-energize them and then they can be programmed with your own intention and to bring Light and Love to all. Each set of mala beads have their own unique qualities and personality, so it is important to take your time when choosing your mala beads.
So now you know the history and significance of Mala Beads you can choose to use them to enhance your meditation practice or to wear as a beautiful necklace which will serve to remind you of your innate power and wisdom.

We hope you have enjoyed reading this and if you want to look at some of our own handcrafted Mala Beads pop over to our website page for Mala Beads and Necklaces.
www.theshungiteexperience.com.au
MalaLove

Hi, we own and run The Shungite Experience. We are an Australian family business and love our Shungite, we hope you do also!